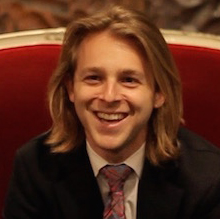 Rmax Goodwin was a featured performer at HotelSpaces.

Born and raised in Los Angeles, Rmax started learning magic at 7 years old. At just 15, Rmax became one of the youngest magicians to perform at the world famous Magic Castle, in Hollywood. And today he is regarded as an expert in sleight of hand magic. His award-winning technique earned him multiple appearances on Fox’s Masters of Illusion. With a bachelor’s degree in Philosophy and an eye for the unusual, Rmax’s shows are much more than a few tricks.